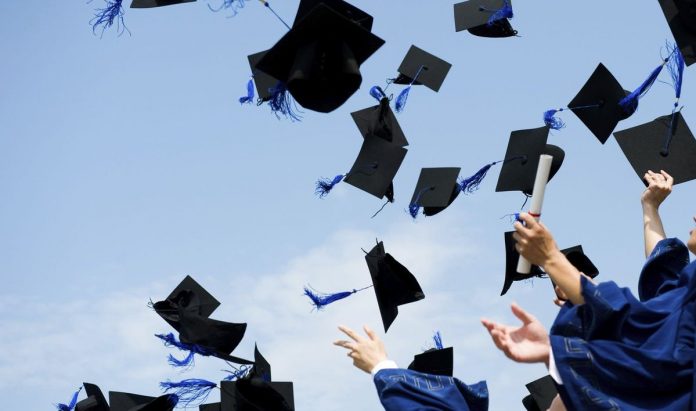 Most students who want to study abroad and away from their home countries think about going to the United Kingdom (UK) or the Unites States (US). These countries have a reputation for providing the best education, but increasingly this reputation is decreasing.

Recently, studies which aim to find the best place to get a degree actually rank another country as the best one. In a study from Study.eu, which ranked countries according to education, life, cost, and career says that the best country to study in is Germany.

Germany surpassed the UK scores by a long way. It scored 83.2 out of 100, while the UK scores were only 69.8. Germany is being seen as an attractive study abroad country because of several reasons:

Universities offer an increasing number of courses in English

Around 150 universities out of 400 in Germany offer courses and degrees completely in English. This makes Germany the second country to offer the most degrees in English after the Netherlands. The language advantage attracts international students who find it more difficult to learn German.

There are no tuition fees

State universities in Germany are completely free. This is one of the most important factors taking into account the increasing education fees in other countries such as the U.S and the U.K. Recently, some universities want to introduce tuition fees for international students, but they will be quite low in comparison to other study destinations.

After students graduate from a university in Germany, finding a job is relatively easy. The education system is strong and provides students with skills that gets them employed immediately. In fact, graduate unemployment is only 2.3%, the lowest on the continent of Europe.

So if you are now convinced that studying in Germany has many benefits, you might be wondering what the top paid jobs in Germany or degrees are. Instead of studying something haphazardly, an increasing number of students want to look at the market and for example, find the high demand jobs in Germany.

Statista, a market research company has conducted a study to find the best jobs in Germany. They took salary data from 60,000 professionals who have full time jobs. This gave a ranking of the 16 highest paid degrees in Germany. The salaries are annual and are shown in the European currency of the Euro.

Here is a visualization of the degrees and their salaries, while below there are also descriptions of what each degree means. 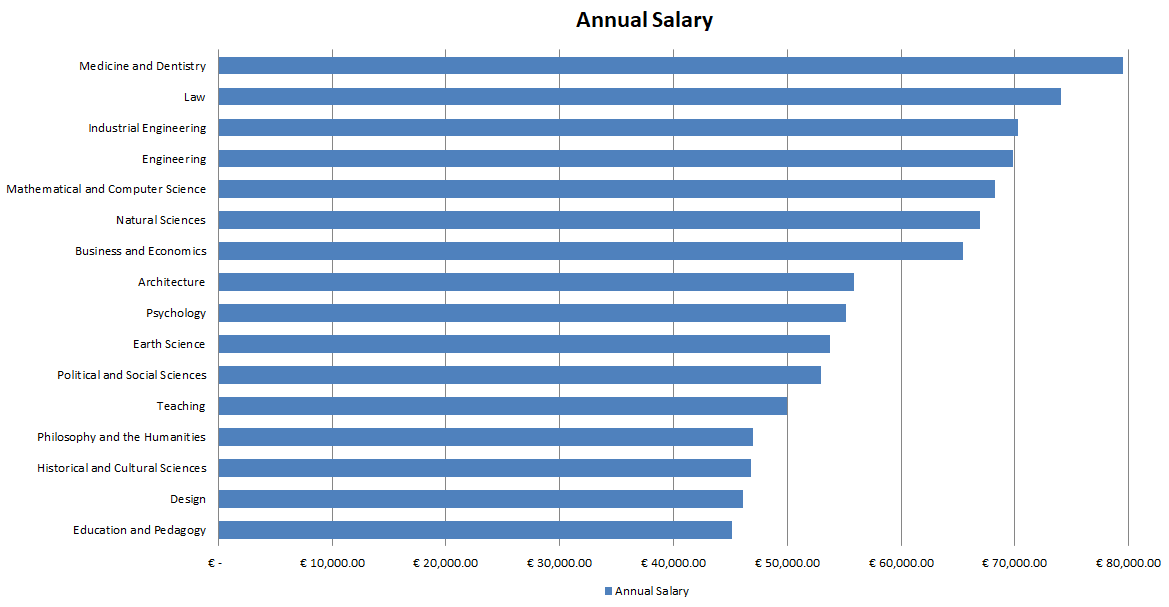 Doctors and dentists are valuable professionals throughout the entire world. Health is seen as one of the most important factors of having high wellbeing in any country. Because of that, medical occupations are the top paid degrees in Germany.

A doctor or a dentist is expected to make the highest amount of money out of anyone with other degrees. The average annual pay is €79,538.

Lawyers are also highly important. Having a good justice system makes a country seem more developed and fair to its people. Whenever we have any legal problems, we are faced with the difficult task of finding a good lawyer.

In Germany, this is not a challenge. Medicine and Law are some of the toughest degrees to get admitted into. The high admittance criteria and the fact that the courses are very challenging, makes them so valuable. Lawyers due to their effort to graduate and their importance in society get paid well too.

The third highest paying degree is Industrial Engineering. This is a branch of Engineering which works towards making companies and organizations more efficient. It can work with both products and services.

In a factory which produces something it deals with reducing machine time and other resources which are not valuable. In services, it looks to decrease time, money, and employee hours which do not add to the productivity.

Because all companies are looking to become more efficient, this degree pays a staggering €70,288 per year.

The standard degree of Engineering encompasses general knowledge from all branches and aspects of the profession.

Engineering degrees are some of the most difficult due to their scientific nature. Engineers need to be highly accurate as small errors could lead to big consequences. That is why they get compensated well too. The yearly average salary for Engineering degrees is €69,850.

The science of mathematics has always been valued. Mathematicians deal with the complexities of all that needs calculations. They come up with models and formulas which solve difficult and challenging problems.

In addition, the advent of technology has made computer scientists highly important too. They discover algorithms and models which make it possible for us to communicate and work with each other only throughout a small screen.

Our dependency on mathematics and computer science has made these degrees well paid. Those who have a diploma in one or the other get an average yearly salary of €68,241.

Physics, chemistry, and biology are also highly accurate sciences. They assist people in making precise materials, knowing the laws of the natural world, and discovering other organisms. Throughout time these three sciences have made interesting and important findings about the world we live in.

Due to this, those with degrees in either of these natural sciences are compensated in hefty amounts. They get salaries which range around €66,954 per year.

Having the knowledge to manage a company and compile its strategy makes the difference between success and failure. All companies and organizations, whether public or private, need people who know the basics and the intricacies of business and economics.

Since we rely so much on our economy and businesses working well and providing us with employment and income, the people with these degrees are compensated with around €65,404 per year.

Architects design the buildings and structures we live and work in. They plan our space and the way we use it. Their skill does not lie in only coming up with buildings that look good, but in also having them be strong and not prone to collapsing.

Together with engineers and other professions, architects work to construct spaces that serve our living and working needs. And they get well compensated for it, since the annual average salary for an architect is around €55,822.

Our mental well being is just as important as our physical health. Whereas doctors and dentists look after our bodies and teeth, psychologists take care of our mind. Increasingly, people deal with problems such as anxiety, depression, or just plain overloading stress.

Psychology and its branches train people with whom we can discuss and find solutions to our mental health issues. They prescribe medication and slowly work through to make us healthier individuals. Their job is demanding and the degree that leads up to it is challenging too. This makes their salaries high too, at approximately €55,204 per year.

Earth is the planet that we live in and until now we have not yet found an alternative to it. Because of this, we have always been curious about its composition and the way it works. We are also concerned with how it is evolving and how we should take better care of it.

That is what Earth Scientists study. They go through the details of how the earth is composed, its geology, its oceans, and its weather. Particularly now, climate change and how the weather is affecting us is becoming more and more important.

Earth scientists can give us answers and advice on how to protect our planet and they are well paid for it. Those who hold this degree make around €53,713 each year.

Besides these 10 of the highest paid degrees in Germany, which were more scientific and accurate, there are also other valuable degrees. These are more theoretical or visual and that is why they rank lower than the sciences. However, these degrees in Germany are still seen as earning people high salaries and life fulfillment. They are:

Whichever degree you choose, Germany has become a better option to study abroad compared to other more popular countries. It gives good language conditions, lower costs, and higher chances of getting a job in the profession you want.