Ask anyone who does not speak German about the language and they will all say how difficult and harsh it sounds. Those who cannot speak it are wary and do not know where to start to even learn it. But there are around 100 million German native speakers in the world, so it is a necessary language if you are planning to interact with them.

Granted, the German language is quite complicated, but with practice and time, anyone can master it. These complications and linguistic quirks make it a great language for those who love learning new and challenging words.

One interesting characteristic that the German language has is its letters. More specifically, the three additional letters of its alphabet make it quite unique. These additional letters are called umlauts and this article will explain what they are and how to pronounce them.

Learning a new language is difficult, especially if it has sounds which your mouth might not have been used to pronouncing. When it is very difficult for two sounds to connect to one another, we try to make them easier and simplify them. That is how umlauts were born.

Umlauts are assimilations or vowel harmonies. This means that one of the sounds was changed to make another similar sound that is easier to say. For example, if we say two vowels with one in the front part of the mouth and the other in the far back of the mouth, it will require us to put more effort than if we pronounced them closer together.

By trying to pronounce these vowels together, the Germanic language got umlauts. The umlauts are more common when the word contains two vowels one after the other, with the second vowel being “i”.

For example, saying the sound “ai”, “oi”, or “ui” is more difficult because the first letter is pronounced by a sound in the front of the mouth, while the “i” is pronounced in the back. So to make things easier for themselves, people initially started pronouncing the “i” as “j”. So those sounds became “aj”, “oj”, and “uj”.

Further down in time, the sounds evolved and are now the three German umlauts, which are written as “ae”, “oe”, and “ue”.

What are the types of German umlauts?

There are three German umlauts in addition to the 26 letters of the alphabet. These umlauts are:

Umlauts are characterized by the two dots on top of the letter and they are very useful for learning German. They are crucial in being grammatically correct and pronouncing the words right.

To make matters more complicated, each of these umlauts has two variations. The variations are for “short” umlauts and “long umlauts” This is to distinguish between different words and it makes a difference in pronunciation.

The difference between short and long umlauts is that the sounds you make while saying them will just differ in length. Instead of holding a sound too long, you will say it quicker for short umlauts, while for long umlauts, you will have to hold the sound for a bit.

How to pronounce German umlauts?

German umlauts are highly useful in the language, but for non-native speakers, they are difficult sounds to master. That is because there are no equivalent sounds in English that sound the same as the umlauts in German. So to be able to learn how to pronounce German umlauts, we have to try and approximate the sounds using existing words.

Since there are two variations of this type of umlaut, we have to go through both of them and give examples. The short Ä is pronounced like the “e” in the word “bet” in English. It is like saying “eh”.

The long Ä on the other hand is simply taking the short one and keeping the sound, so making it longer. It is like saying the “ay” in “say”.

For a better idea of the pronunciation, we’ve compiled a list of examples of words that sound like Ä and some German words that use this umlaut.

Most beginners will have a difficult time pronouncing this umlaut and English speakers will have the urge to glide the umlaut into a different vowel. That is when you are trying to say the short Ä for example as an ê and you say “êy”. You must try not to do this because the German vowels and umlauts do not mix with each other in pronunciation as is the case in English.

For a better idea on how to pronounce the Ä umlaut, below you will find an audio recording from German learning sites where examples of the use of Ä are provided.

The umlaut Ö is one of the more difficult umlauts for non-native Germans to pronounce. For English speakers specifically, this is difficult because English does not have a sound that is similar to it. So if you are learning German, you must be careful about how you pronounce this umlaut and practice it a lot.

The way you can go about pronouncing the Ö umlaut is by pursing your lips halfway in a circle as if you were saying O and then trying to say the short Ä.

We’ve compiled examples that you can use as a basis to be able to say the umlaut Ö.

*The “r” in the pronunciation is silent

For a better idea on how to pronounce the Ö umlaut, below you will find an audio recording from German learning sites where examples of the use of Ö are provided.

The last umlaut in the German language is the Ü. Similar to the Ö, there is no sound in the English language which is the equivalent of this umlaut.

The way to pronounce the Ü umlaut is by making the sound “ee” and pursing your lips as if you were whistling, almost completely shut. Your tongue must stay in the same place as when you say the sound “ee” and you should only change the shape of your mouth as if we’re saying “oo”.

The easiest way to do this is to start by saying the sound “ee” and then slowly changing the shape of your mouth from its wider position to a closed whistling shape.

We’ve compiled examples that you can use as a basis to be able to say the umlaut Ü.  Unfortunately, this umlaut is almost impossible to find in any English word so there any no examples of it in the language.

For a better idea on how to pronounce the Ü umlaut, below you will find an audio recording from German learning sites where examples of the use of Ü are provided.

In summary, the three German umlauts are pronounced as follows:

What are German umlauts used for?

German umlauts have evolved in the language as part of the grammar. In order to be grammatically correct in using German, you must use umlauts too. Not using them will confuse those who are reading or listening to you speaking German.

As a general rule of thumb, umlauts are mostly used in the following situations:

In any language, the singular is one and the plural is many. The German umlauts are used to make that distinction. For example, the word “house” is singular and in German, it is “Haus”. In the plural, the English version becomes “Houses”, while in German it becomes “Häuser”. Additional examples include:

Present and Past Tense

How to type the German umlauts?

Each country has their own keyboards which have been customized to fit its own alphabet. So if you are not a native German speaker or do not live in Germany, your keyboard might not have the umlauts you need to type correctly.

One solution to this is to simply get a German keyboard. It will have the umlauts on the right-hand side, as shown in the picture below. 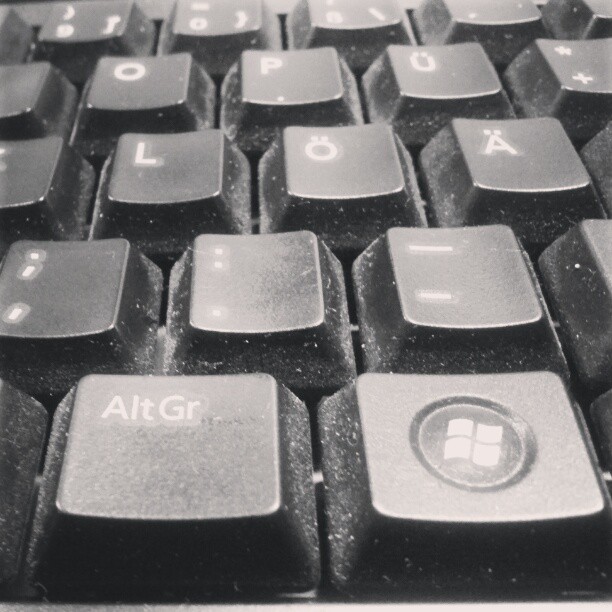 The other one is to write the umlauts using the keyboard combination keys. These combinations work on most keyboards and will give you the umlaut you need.

Finally, if it is too much trouble to do either one of these, you can modify the way you write umlauts. We said in the beginning that the umlaut is the letter followed by “e”. So you could write the umlauts like this:

German speakers will know that when you write a letter followed by “e”, it means you are writing the umlaut. So whichever way you choose, you will be using the German umlauts correctly.